I've got "bless your heart cataracts"

I'm almost 69 years old.  Sometimes I'm in awe of being (what seems to me) so old.  In my mind's eye, I'm in my thirties or forties, at the most. But no, I'm nearly the 7-0, and it feels really strange.  One of the things about getting older is that our bodies do what bodies do when they get older - they start deteriorating.  Life is hard on bodies.  My eyes are developing cataracts, and glasses don't help with cataracts.

At an art class I was taking last month, I kept looking at my palette, and I honestly could not clearly distinguish the different values/shades of green. Things were too blurry.  I'd blink a few times, and things would clear up somewhat. Finally, as I was driving along the expressway a few weeks ago and realized that while I was perfectly safe to drive, there WERE double lines in my vision along the side of the road instead of the single line I knew was actually there. When I'd try to read a road sign, I needed to be right at it in order to read it. Thank goodness for GPS making it unnecessary for me to read street signs before I got to them.

So I called my optometrist who happens to have been my son's best friend in high school and college.  He's a wonderful eye doctor.  My cataracts had grown significantly from my last eye checkup seven months ago.  So his receptionist made an appointment for me with the doctor who does cataract surgery.  I met with him today.

I went to the appointment expecting to be in and out in 30 - 45 minutes.  I was there for over two hours.  So many machines - two different eye drops - so many tests with blinking lights and flashes of bright light.  One nurse, while looking at my eyes via one of the machines, remarked that my cataracts were quite bad, and then she added, "Bless your heart."  So I've officially named my cataracts the "Bless your heart cataracts."

Surgery on the right eye is scheduled for August 14th.  They had ONE sooner date, but it was while we are scheduled to be at the beach.  The left eye will be done on August 28th.  So I still have another 7 or so weeks of fuzzy vision.

I've put painting on hold for awhile because I feel my colors are not as good as they should be.  Jarrod (my optometrist) said his father-in-law had the surgery not too long ago, and while his vision was wonderfully better, he told Jarrod that the best thing was how much clearer the colors are now.  So I have that to look forward to, although I admit I'm very nervous about the actual surgery.  It's disconcerting, though, how fuzzy things are at times.
- June 28, 2018 No comments:

Over the past few weeks I've been taking a Monday afternoon art class (oil landscapes) from Kevin Menck.  The classes have been held at Warehouse 521 - which is a studio in the Hundred Oaks area of south Nashville.  Kevin is fascinating in that he paints almost entirely with a #1 round brush - usually on a 9 x 12 linen panel.  He does a lot of plein air painting - although he admits that in hot weather like this, he likes to stick with the studio in the heat of the day.

It's been a good class.  It has been good to watch how Kevin paints.  He paints quickly and doesn't get bogged down with details - big shapes, value, and temperature.  To cool down colors, add blue or white.  To warm up colors, add yellow or red.  He paints with a limited palette of 4 colors: titanium white, cad scarlet, ultramarine blue, cad lemon.
- June 20, 2018 No comments:

Paint Us! Paint Us! - a painting by Candy Crawford Day

One of the blessings of getting involved in the art community is the opportunity to make connections with other artists. I once wrote that p... 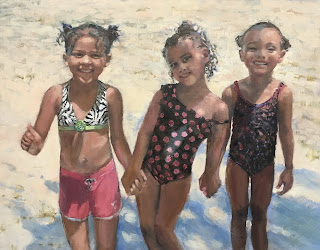