Done and done!  We went to Italy. We drank lots of cappuchino and ate lots of pasta and did lots of sightseeing and lots of driving around the Tuscan countryside. We came home and experienced jetlag, and now things are back to normal again.

Italy!  One of my life dreams was to visit Italy, and the visit couldn't have been more phenomenal. I loved it, although I was very happy to come back home where people can understand me when I speak and where I understand others, too.  The language barrier was probably the biggest issue we faced. I made a pledge that I will seriously study the language more and have at least a beginning vocabulary and basic knowledge before visiting another country again. The only day that language wasn't a barrier was the day we spent in Florence where there were so many other tourists. The day in Sienna was probably the next one - and both those cities are larger with many more tourists - and thus more English-speaking people.

First - our trip to Italy started off with a 6-hour delay in Chicago. We had SIX HOURS on the plane before it finally took off. Twice the plane taxied out to the runway, and twice it had to return to the gate because of issues with the GPS. They finally decided that instead of trying to repair the GPS, they'd just replace it. So we waited while they did that - and finally we left for our flight to Frankfurt, Germany. Of course all connecting flights were missed and had to be rescheduled. So we ended up spending a few hours waiting at the Frankfurt airport before getting a late afternoon flight to Florence - not getting to our villa in Italy until around 10:00 p.m. Tuesday night - so we traveled & "waited" all day Monday and Tuesday. The first thing I did once we got to the villa was to take a hot shower, wash my hair and put on clean clothes.

I learned quickly that first class/business class seats are worth every penny (if you have the pennies to spend on it) on an overnight or extended length flight. I had NO IDEA that it's like having your own little micro-mini room (well - sort of) and a seat that reclines into a bed. The "room" feeling came from the privacy walls build around each seat.  Although Ron and I sat in adjoining seats on the flight from Germany to Chicago on the way home, we could not see each other without standing up. Ten days earlier, on the flight TO Frankfurt, we also had adjoining seats that obviously made for two people traveling together, and we could talk and interact but still fully recline and sleep when desired. I actually slept well on the flight from Chicago to Frankfurt.  And I got in some good dozing ten days later on the way home on the flight from Frankfurt to Chicago.

I also learned that after driving and sightseeing all over the countryside during the day, I'm usually too tired to paint in the evening.  One day I painted part of one painting - and that was it.  And I really wasn't "into" it that day. I'm glad I had pared down all my painting supplies to pack for the trip because I could easily have left it all at home. I took some great photos, and I have at least two or three that I want to paint - and I will work on those in the coming weeks. Lesson learned: unless I'm traveling to an art class or event, I will leave my painting supplies at home and stick to photographing scenes to paint later - or maybe bring a sketchbook if I want to plan out drawings while on the trip.

Here's a photo of our little rental car - a Fiat Panda.  That names cracks me up, but that car got us safely all around our little area of Tuscany. Our daughter had told us to be sure and get as small as car as we could since many of the streets are narrow. We enjoyed our little blue Panda.

The next two photos are of our villa. The weather was wonderful except for that one day - sunny and in the upper 60s. We had to wear our heavier coats on that particular day - and that was mostly for wind and not temperature. That wind was fierce!

I had to get a photo of our villa with the forsythia in the foreground.  I loved the forsythia and the daffodils that were blooming all over the area of Tuscany that we visited.

We saw a church down a little side road out in the countryside near Siena.  We traveled down the road and looked at the church. This stairway was beside it - almost overgrown with these bushes, and behind the stairway was a forsythia bush in bloom. This is one photograph that I want to paint.

In a small town between our villa and Siena was this church. The display on the altar area was breathtaking with the crockery pots "pouring" out the white and red fabric. I assume the red is for Christ's blood. I will have to look up what the white cloth symbolizes. Beautiful display, though.

One thing we learned about Italy is that there are lots of cats there.  Truly, we saw cats all over the place, and they looked to be mostly wild - but healthy - not necessarily pets (although some most certainly were) - but cats just staying around fields and vineyards, homes and roads. We thought that maybe with so many vineyards, the Italians keep lots of cats to control mice, moles and other rodents from eating all the grapes. I don't know. The cat in the photo was at the entrance to the long driveway leading to our villa. We saw it (and two others) several times over the course of our stay there. If I could paint a cat, I'd want to paint that one.

This was a scene from San Quirico d'Orcia which we visited on March 25th. The fact that there were clotheslines outside every house and apartment - with clothes usually hanging out to dry - fascinated me. Italians can afford clothes dryers, but instead, most of them choose to dry their clothes on lines. This was an old village on a hill with cobblestone streets - and yet people still live there, have plants on their stairways - and a clothesline right outside the door - along with a well. Beautiful!

One of the few food photos I made.  This was ravioli I bought at the Bar I1 Palio  restaurant in the Plaza Del Campo in Siena. We ended up eating both lunch and dinner on March 23rd. The food was delicious - and they even made a Cosmo for me. That was the day we walked over 16K steps - and 19 flights of stairs.  It was actually more than 19 flights - but my Apple watch only recorded 19. Scenery, architecture, art work (statuary and paintings), and food were all magnificent.

I wanted to get this photo of one of the vineyards to show how severely they prune the vines. They prune them right down to the nubs!  I'd love to see the vineyards again in a month or two when the new growth has filled in all the spaces.

We visited Brolio Castle - Ricasoli on March 22nd.  It was amazing!  It was the home of one family - and that family has owned the castle (still does) for a long, long time. This was in Gaiole in Chianti. But within the very tall fortress-like walls of this castle, there was still a church. Very simple and yet beautiful. We couldn't go inside. However, we brought home some olive oil from their olive groves. 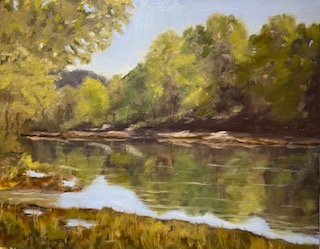