PACE19 in San Francisco is a wrap, too! 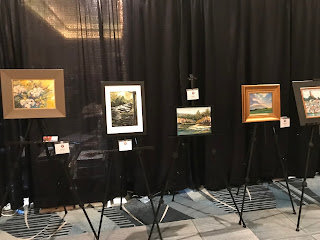 I attended my second Plein Air Convention and Expo last week.  It was held in San Francisco.  I considered canceling the trip because there has been so much negative press about San Francisco lately - trash everywhere, human feces in the streets, hordes of homeless people. I didn't see all of San Francisco - and there WERE lots of homeless people. However, I didn't see piles of trash - and no feces of any kind on the streets. What I saw of San Francisco is beautiful, and the convention was much better than last year.  Last year everything was so crowded that I couldn't see speakers or the huge monitors.  This year the rooms were bigger - and I could always get a good seat - even for the most popular speakers.

Before heading to San Francisco, I had to select the paintings I would take for the Gallery -  a place right inside the expo area where attendees could pay for an easel and display a painting for sale.  Below are the three paintings that I selected to take. I could only display one at a time, but I decided to take three in case one sold. IF one sold, I would have another one to put on the easel in its place. 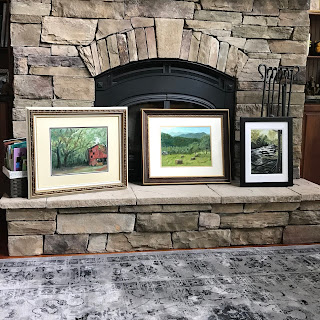 What I learned is that the Gallery, for me, is a waste of time and money.  I only saw one painting with a sold sign on it.  I saw a couple paintings that I would have liked to buy, but I couldn't justify buying any paintings when I spent so much to ship my paintings there. None of mine sold. So the last night we were there, I boxed them back up and shipped them back home. Thus I spent several hundred dollars in shipping there and back and learned that I won't waste money on renting easel space at PACE again. I didn't expect to sell any paintings, though. I AM a beginner - but I'm glad I at least tried and took that chance.

Ron and I flew to San Francisco - a direct flight from Nashville - on Tuesday,  April 23rd, and we had a direct flight home on Monday, April 29th.  We spent six really wonderful days there! Lots of great food - great scenery - beautiful city.

Although we got there on Tuesday afternoon, the conference didn't officially begin until Wednesday afternoon.  So we had time to do other things.

As soon as we landed that first afternoon, we explored San Francisco a little bit. We headed to Fisherman's Wharf. I loved that area. Had delicious fish and chips, and then we just walked around the area. 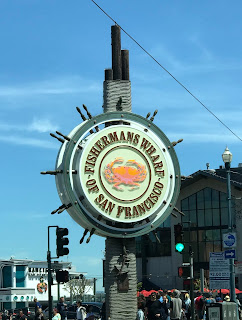 We heard a lot of "barking" and walked over to where there was a floating platform covered with seals. They were huge! A lot of people were on the walkway above the platform looking at them. Look closely at the photo below and you'll see dozens (a hundred, at least) of seals flopped out on the platform. Periodically, they'd all start barking, and that was an impressive sound! It was such fun to watch them swim around and then maneuver their big bodies up and onto the platform. 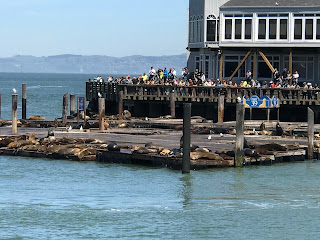 From Fisherman's Wharf, we could see Alcatraz Island across the water.  We had signed up for a tour on Wednesday morning (the next day).  So Wednesday we went on the Alcatraz tour, which was fascinating. We got lots of pictures, and we ended up buying several books about the different prisoners and different perspectives of Alcatraz. Here are Ron and me with Alcatraz as the backdrop. 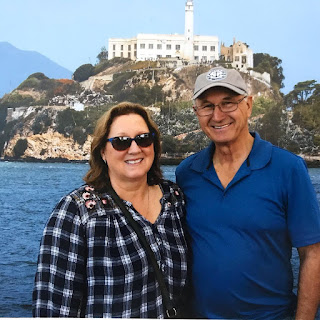 The view of Alcatraz Island from the tour boat. 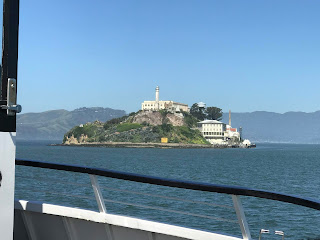 The view from the boat heading back to San Francisco from Alcatraz.  Love the streets going uphill! 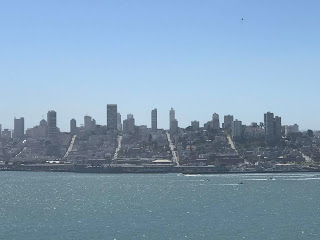 Our hotel was the Hilton San Francisco Union Square.  This was the view from our room.  Just spectacular.  We were on the 37th floor. We kept the curtains open the whole time because the view - morning, day, night - was beautiful. 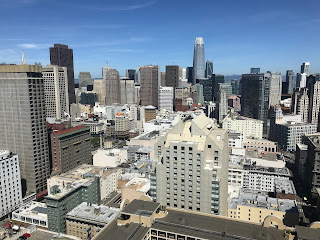 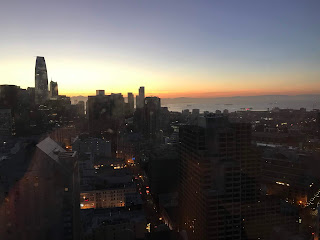 A restaurant right across the street from our hotel - the Taylor Street Cafe - had a great breakfast that we tried once - and Ron tried a second time later in the week. I, of course, took the opportunity for Eggs Benedict. I took a photo of this sign that was on the wall, which I thought was cute - and true.

Once the conference began, I attended a bunch of painting demos - but only took a few photos here and there. There was a wealth of information available - and great learning from accomplished artists. Some of the artists were better at painting than talking about painting, but, for the most part, the demos were helpful. I learned a lot, and I have a lot to study and practice now that I'm home again. One of the best was about how to be your own art instructor.  Can't remember who led it, but it was super helpful. I feel that I've attended so many workshops, but haven't had the time/motivation afterwards to implement what I learned. That changes now. Two days ago I started a "paint every day" challenge - painting the same scene five days in a row. That was one of the suggestions in the demo.

Eric Rhoads - the "founder" of PACE and Plein Air Magazine was everywhere. I attended all three days of his Marketing Boot Camp - which means I was up, dressed, and in the main conference room by 6:30 three of the mornings. Eric was well prepared - had good interaction and engagement with the audience. I took many pages of notes, and I learned so very much! I'm not really much interested in marketing my painting at this point.  I'm still a novice artist. However, the information was valuable as I improve my art and work towards someday being able to sell my art. 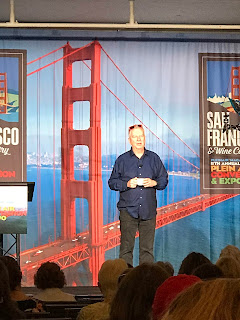 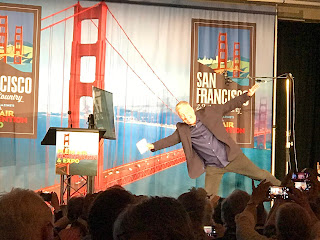 The paintouts were great.  Imagine HUNDREDS of artists set up in the same general area painting. It was inspiring and fun. First Day of painting (Thursday) - the Golden Gate Bridge as seen from Crissy Field.  I brought my painting home to finish. The shipped paintings were delivered late yesterday.  So tonight or tomorrow I will try to finish it. That was the coldest day during the conference. When I was packing, at the last minute I packed a jacket, and I'm so glad I did. The day at Crissy field, I needed that jacket! The fog covered the top of the Golden Gate Bridge - which gave it a dreamy look. I hope I can make my painting convey that look well. 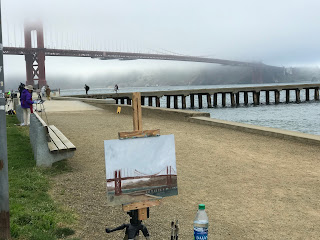 Second paint-out day (Friday) - Golden Gate Park.  I chose one of the garden areas.  Again, the painting is unfinished.  I will finish it within the next few days.  This photo shows the scene I painted. 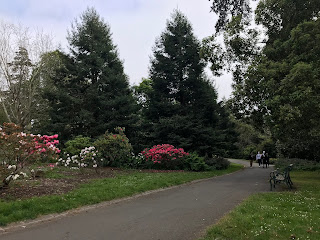 Our third paint-out day (Saturday) - the Golden Gate Bridge as seen from Land's End. This was the place that as I walked back to the bus after painting for several hours, I thought to myself, "I LOVE this!"  It was fun!  It was invigorating! I was fascinated walking around and looking at what some of the other artists were painting. Everyone had their own style and way of painting. Truly amazing!  I am really pleased with my work on this one. It will be the first one I finish tonight or tomorrow.  Painting it en plein air, I found that some of the details looked skewed from the photograph.  So I'll work on that, too. 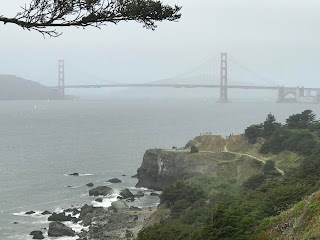 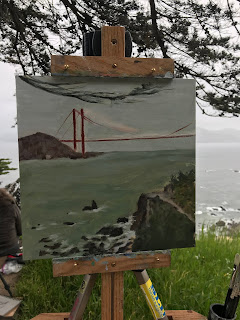 On the final day of the convention (Sunday) - after the expo and gallery and everything else was closed, PACE19 spent the day at the Viansa Vineyard and Winery in Sonoma. Ron spent the day with me, and so I decided not to paint but to sightsee with him. We crossed the Golden Gate Bridge twice, and I enjoyed seeing it from this perspective. 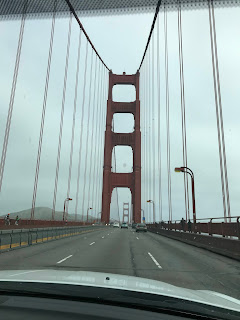 We went by Viansa Vineyard and Winery and took some photos of the other PACE folks painting there. In reviewing the convention, I will make the decision next year to stick with the PACE group on the last day of painting. At the time, there was nothing at the vineyard that really inspired me to paint. However, I missed an opportunity to paint and connect with other painters, and I won't do that again. There were buses to take us to and from the paint-out locations.  I had signed up and paid to ride the bus to all four paint-outs, but when Ron decided not to go out on his own that day, I skipped the bus and rode in the rental car with him instead. We had a good day - sightseeing and seeing some things I wouldn't have seen if I had taken the bus and painted all day at Viansa. So it all balanced out in the end. Here's a photo of some of the PACE19'ers painting at Viansa. 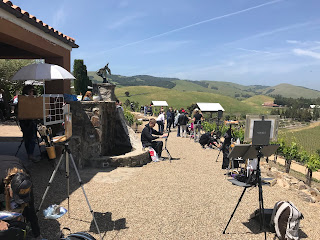 All in all, it was a great six days. Next year's convention is in Colorado - outside of Denver. I've already signed up for it, and I'm looking forward to it. Ron can probably fly his plane to Denver. It will be a long flight in his small Bonanza plane, but do-able in one day. That means I don't have to worry about packing light or shipping things ahead. I can take whatever I want to take without worrying about weight and shipping prices. Plus, in Colorado there will be plenty of things that Ron will enjoy doing on his own while I'm at the convention. It will be fun.

Speaking of Ron - on the days that I was attending demos and riding the bus to paint-outs, he was having a good time on his own.  He spent one day learning to fly a float plane at a place a couple hours outside of San Francisco. He spent another couple days at a gun club about an hour outside of San Francisco. He spent time in China Town with friends he made at the gun club. So he was able to do things he really enjoyed doing while I was "art-ing".  He's been wanting to learn to fly a float plane for years. I was so happy he finally was able to do that.  It was a good mix of each of us spending time doing what we enjoyed during the day - and then being together in the evenings to eat dinner and talk. Good time all around.
- May 04, 2019 1 comment:

January 4th, I was still on the "colored pencils" train. I wasn't ready to face my long-neglected studio, and so I took the e... 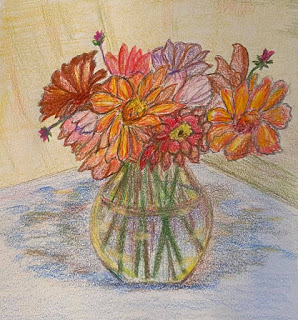