It (the repainting of our house) has been going on a month now - actually a little more than a month.  Of course Ron and I were out of town for a week during that month -and the painters have had several 3 and 4 day weeks.  Still, they are not finished painting the interior of our house.  However, the end is in sight.

Today they did most of my art studio, and they will finish it tomorrow.  They had done the trim and ceiling in the art studio a couple weeks ago - but then did other rooms before going back to finish the studio.  I thought that the carpenters would be here tomorrow to start on the new cabinets for the studio, but Ron told me that it was delayed for a couple weeks while they finish another project.  However, once the painters finish tomorrow, I can start getting my studio back to working order.  And maybe by the weekend, I can actually start painting again.  I'm anxious to finish the painting of the church at Epworth by the Sea that I started at the beginning of this month when we were in Sea Island and I was working with Mary O Smith.

Totally painting and re-decorating my house is a MUCH bigger job than I'd anticipated.  Still, I'm very happy with how everything is looking.  And it will have been worth the 6-8 weeks of living with so much disruption in our home.

I've decided to put plantation shutters in our great room, kitchen and dining room.  So the painters had to take down the blinds and the curtain rod brackets today - and then patch those places - and they'll sand and repaint them tomorrow.  So although those rooms were "finished," they will need those touch-ups tomorrow after my change of plans.  I didn't want to put up heavy curtains again.  The plantation shutters will look clean and fresh and LIGHT - which I love.

I'm really excited that my studio will now be a light color instead of that dark brown.  The studio originally was going to be a home theater, and so that's why we painted it a dark color.

After the painters finish, we will get an electrician to add better lighting to my studio.  And then the carpenters will build cabinets along one wall of the studio so that my art supplies will have a "pretty" place to reside rather than on top of plastic snap-together bookshelves from Home Depot.  THEN my studio will be complete.  I'm very excited about it all!

And I have lots to do with the rest of the house, too.  We are getting new furniture for the great room - new rugs, too.  I've already bought new linens for the master bedroom, the downstairs guest room (previously "the pink bedroom" but is now the "gray and yellow bedroom"), and the upstairs bathroom that used to have red towels/rugs now has navy blue.  New window treatments in some rooms and new area rugs.  And in the kitchen and laundry room - all new appliances.  It's quite a major overhaul on the interior of the house.  And a good bit of money - but we've put very little into the house in the 11 years we've lived here.  It was time to re-do things.

I'm clearing out a LOT of unused items from the house - I've got boxes and boxes full of stuff stacked in the garage that we will donate to the Salvation Army.  Simplifying, reducing, organizing.
- March 20, 2018 No comments:

I’m afraid with all the painting and then building cabinets and installing better lights in my studio that it will be at least a few weeks before I can do any significant painting in there.  However it is going to be so awesome when it’s all finished.  No more dark walls and not being able to see colors very well because of how dark it is in there.  And all my supplies put away in nice looking cabinets. It will be marvelous!
- March 12, 2018 No comments:

For day 3, I asked Mary O to come to our room at The Cloisters at Sea Island. We have a huge porch with beautiful scenery.  I wanted to go over the two tree paintings I’d started in days 1 and 2, and I wanted to get the sketch completed of the chapel at Epworth By The Sea before we went there to paint.

So that’s what we did.  This first day's painting is my least favorite of the three days.  I'm still not happy with the leaves - they don't look natural enough.  I will work on this more at home. 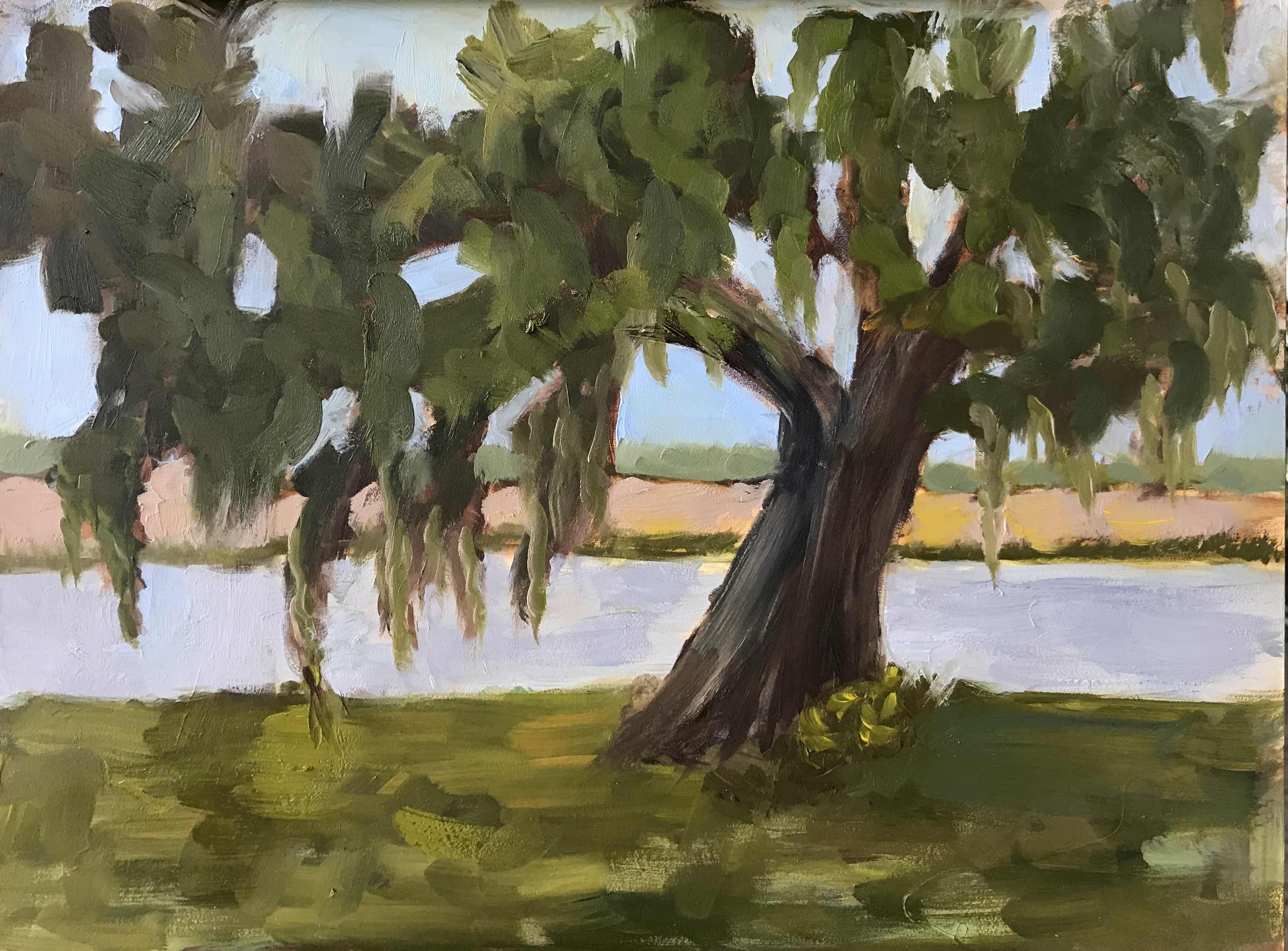 This next one was the Day 2 painting.  This is where we set up in an alley and looking down the alley at this tree.  In retrospect, I would've said no to a second day of painting trees, but I didn't.  I like this painting, although it's not one I'd particularly want to frame.  I like the shadows in front of it. 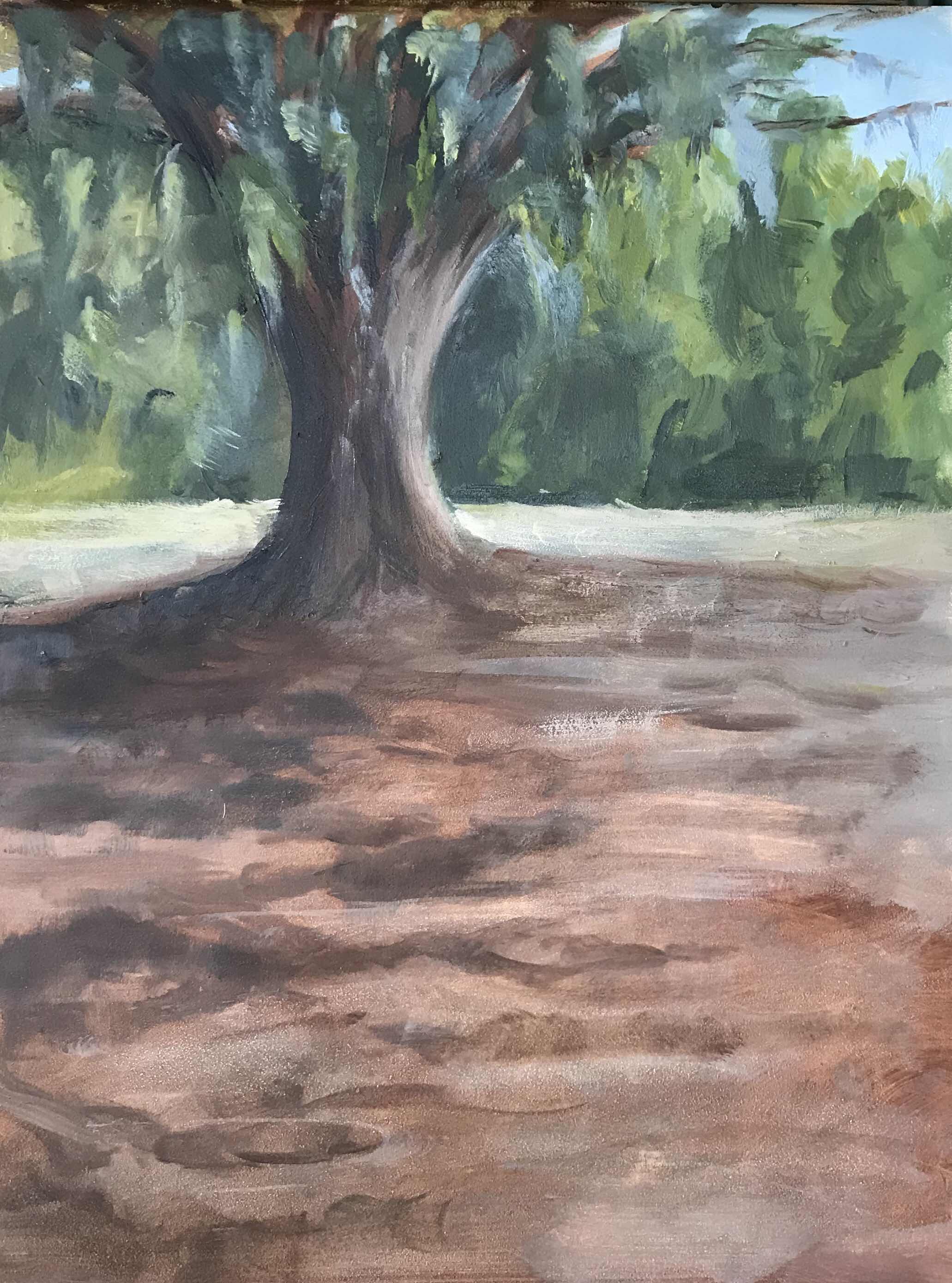 Here is a photograph of the chapel at Epworth By The Sea. 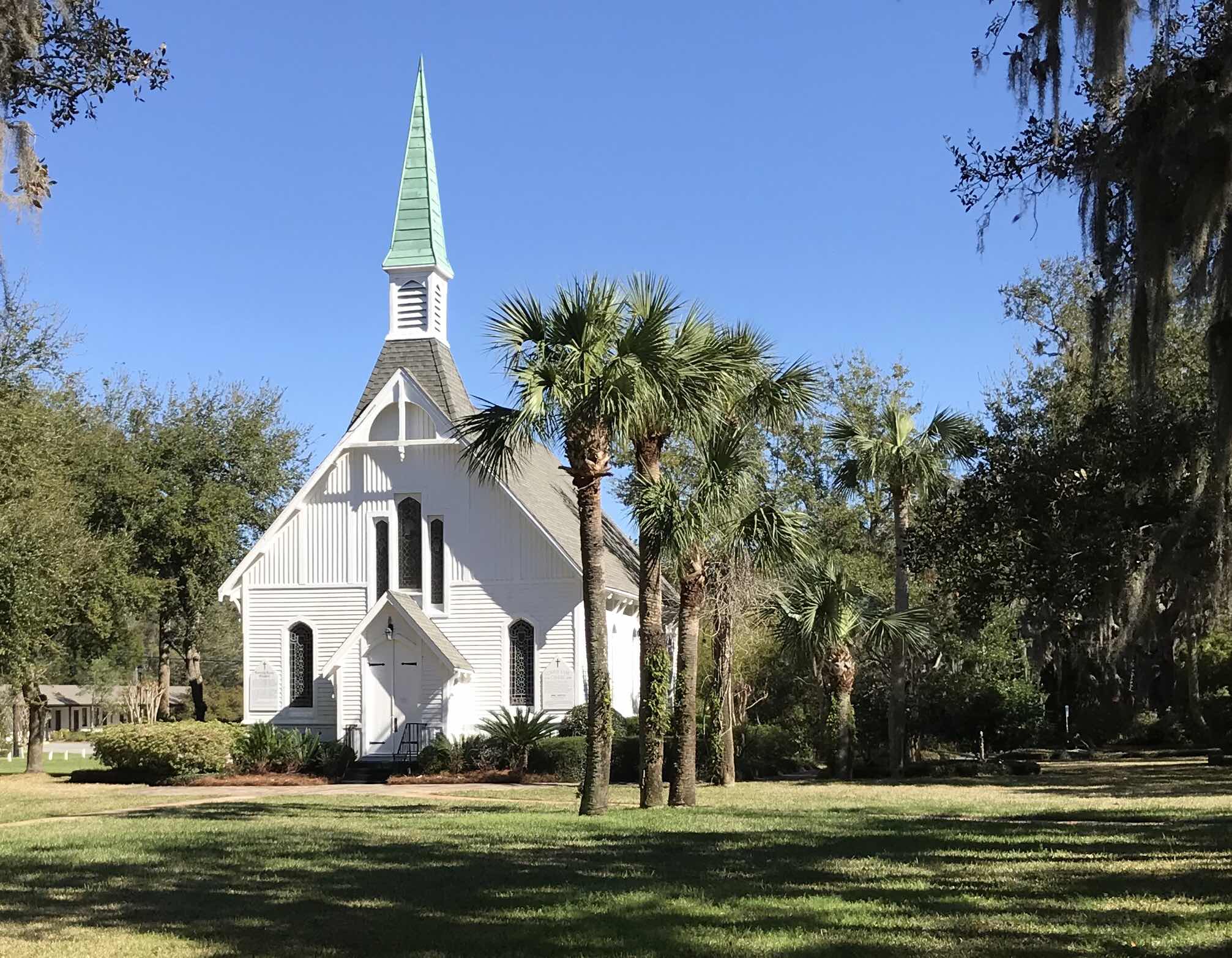 And here is the sketch we finished before heading to Epworth By The Sea to start painting. 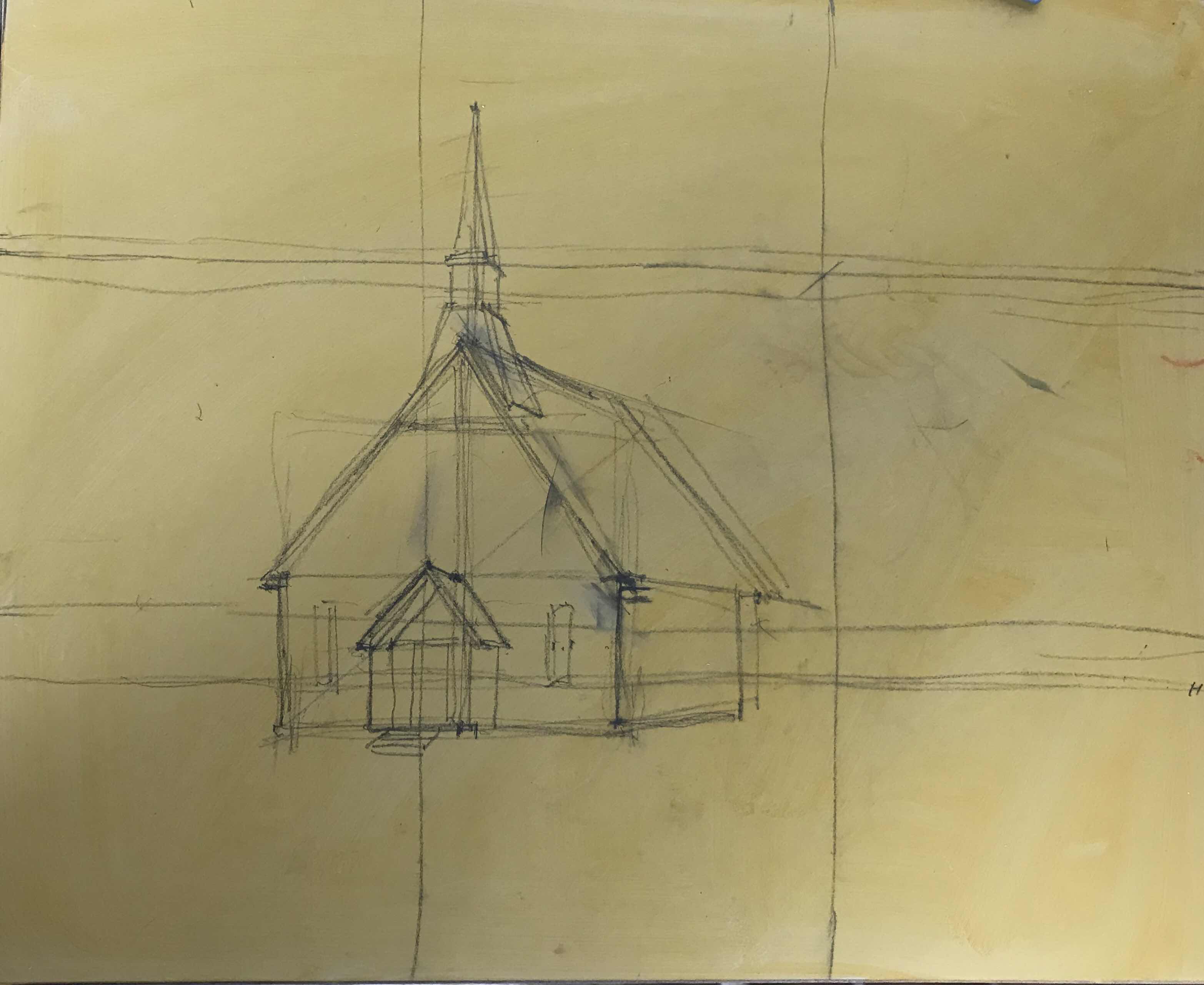 Here is what I’ve done up to this point.  However I must set it aside for now because we will be heading home soon.  Ron will finish his last competition at the Seminole Cup in the next little while, and we will head to the airport and head home in Ron’s Bonanza.  It’ll take about 3 hours for the trip home - depending on whether or not we have a head-wind or tail-wind or no wind.

Once home, I hope to get my studio out from under all the painters’ plastic and be back to painting in there very soon! 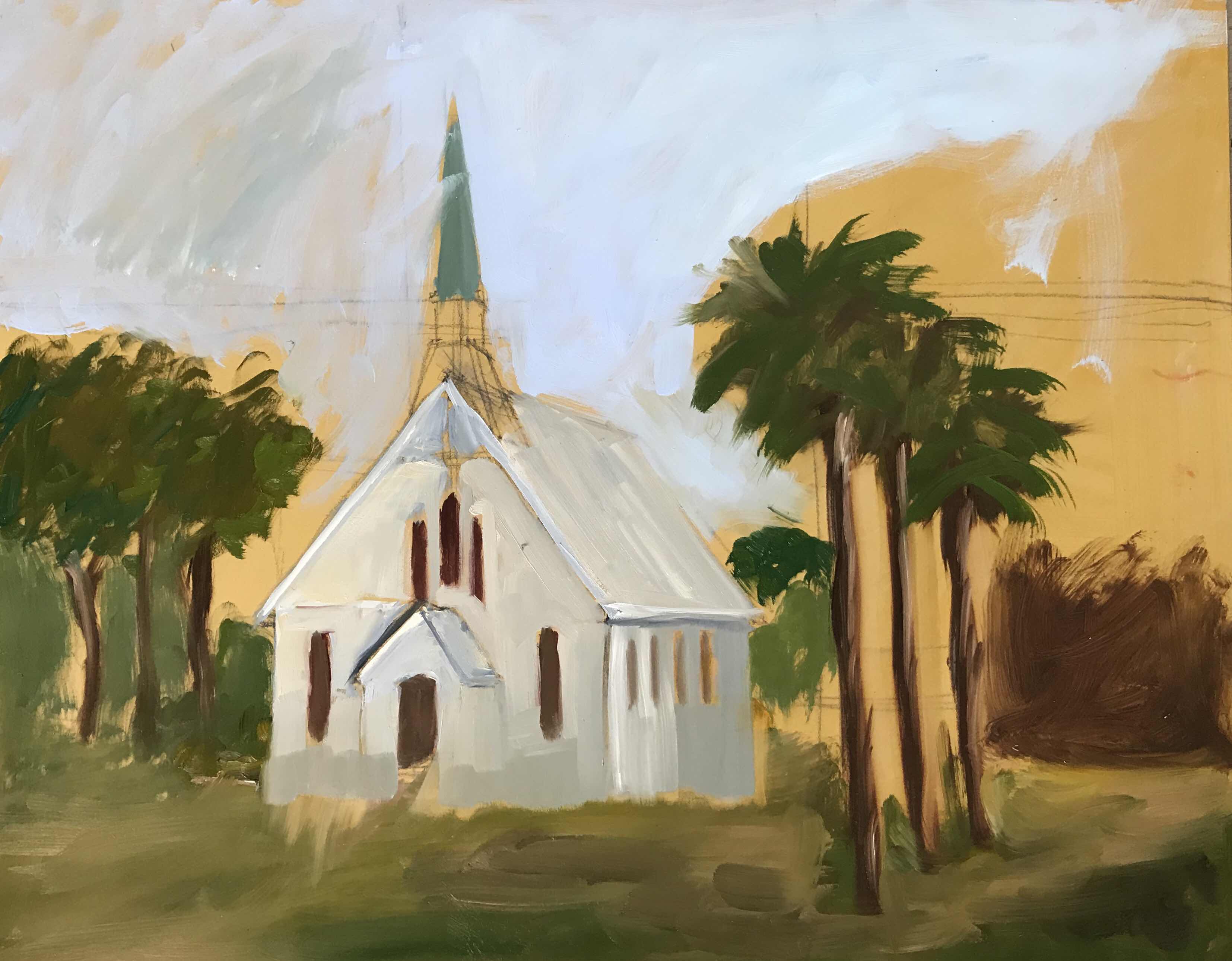 Oh wow!  The weather and scenery here is breath-taking.  Just beautiful!   Today Mary O and I spent the day outdoors.  First we drove to St. Simon's Island and set up for plein air painting in a small alley facing a large oak tree.  We wanted to paint the oak tree -with the Spanish moss hanging down from it.  However, the shadows in front of the tree were really interesting.  The alley was criss-crossed by all the shadows from the three branches.  It was really pretty.


Here is the beginning of my painting. 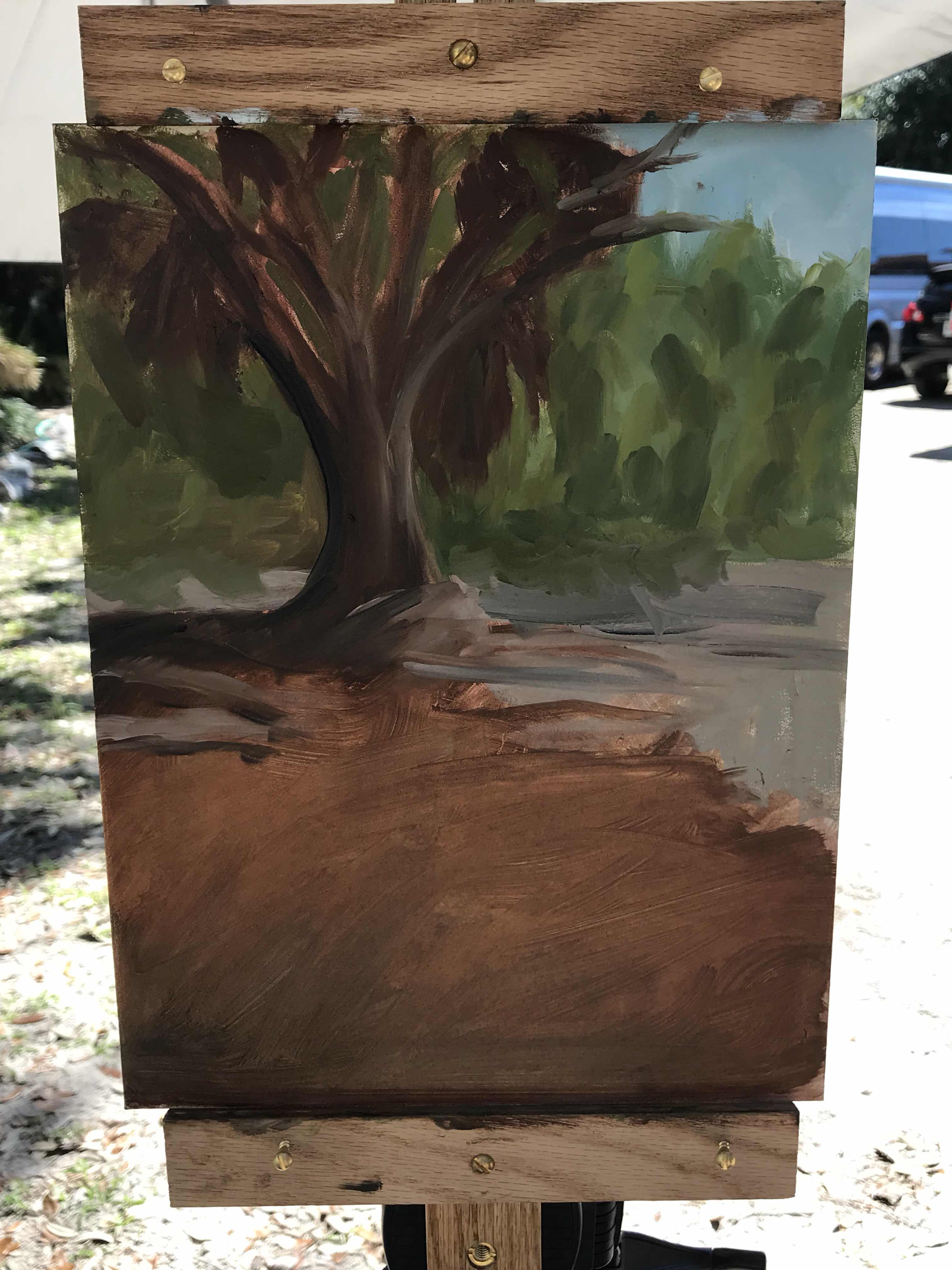 I've GOT to remember to take a photo of the painting with what I'm painting from in the background. I keep forgetting to do that - to capture both in one photograph. Here’s my semi-finished painting.  I’m going to talk to Mary O about it tomorrow.  I may add a person or two walking along the alley.

Later we went into the Village again, and I saw this SSI (St. Simon’s Island) Rocks display.  Sure wish I’d brought several of my painted rocks.  There were only those two small unpainted rocks in the container. 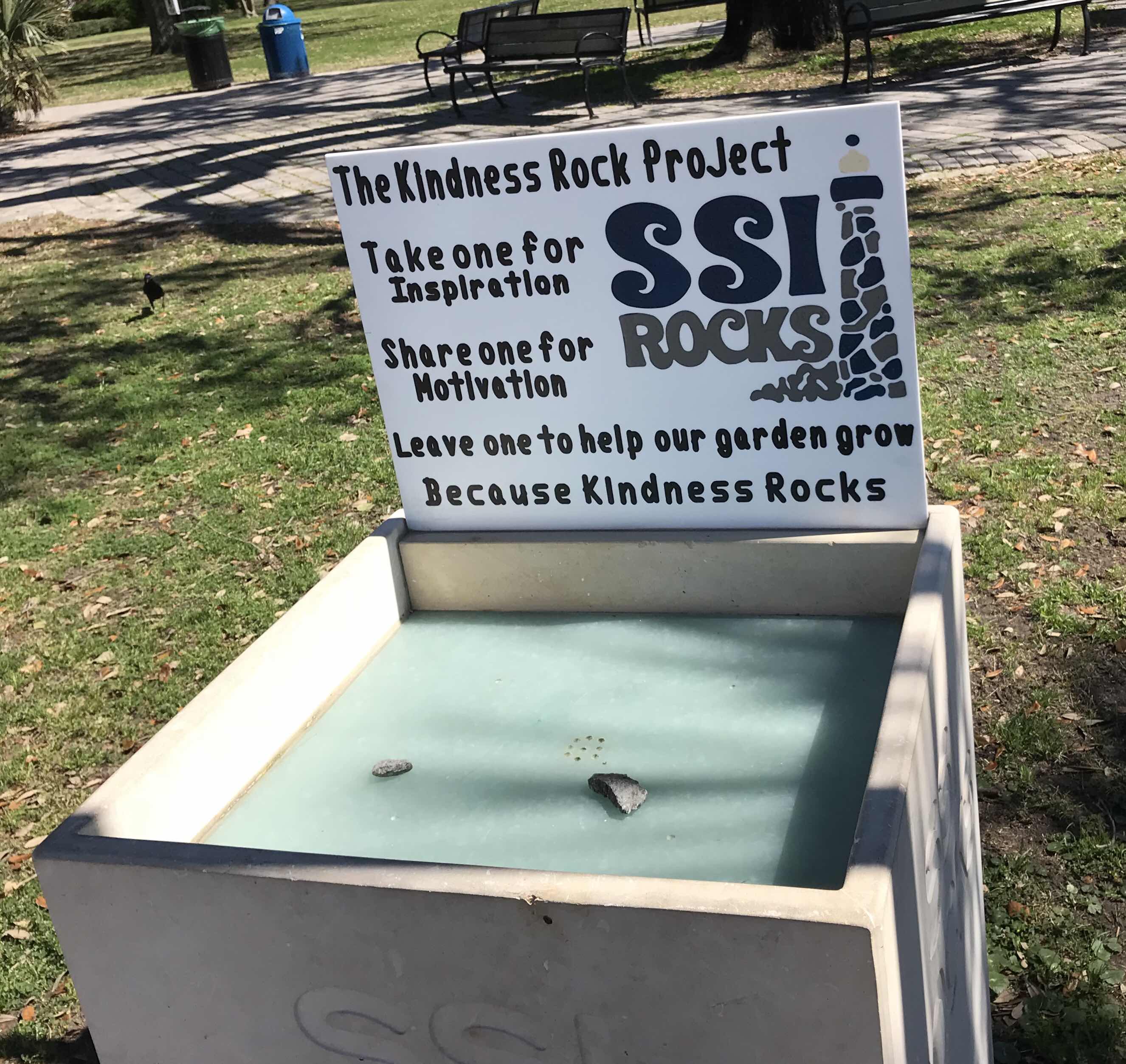 We considered painting the lighthouse but neither of us were particularly excited about the idea - especially since there weren't any shady places for our set up. 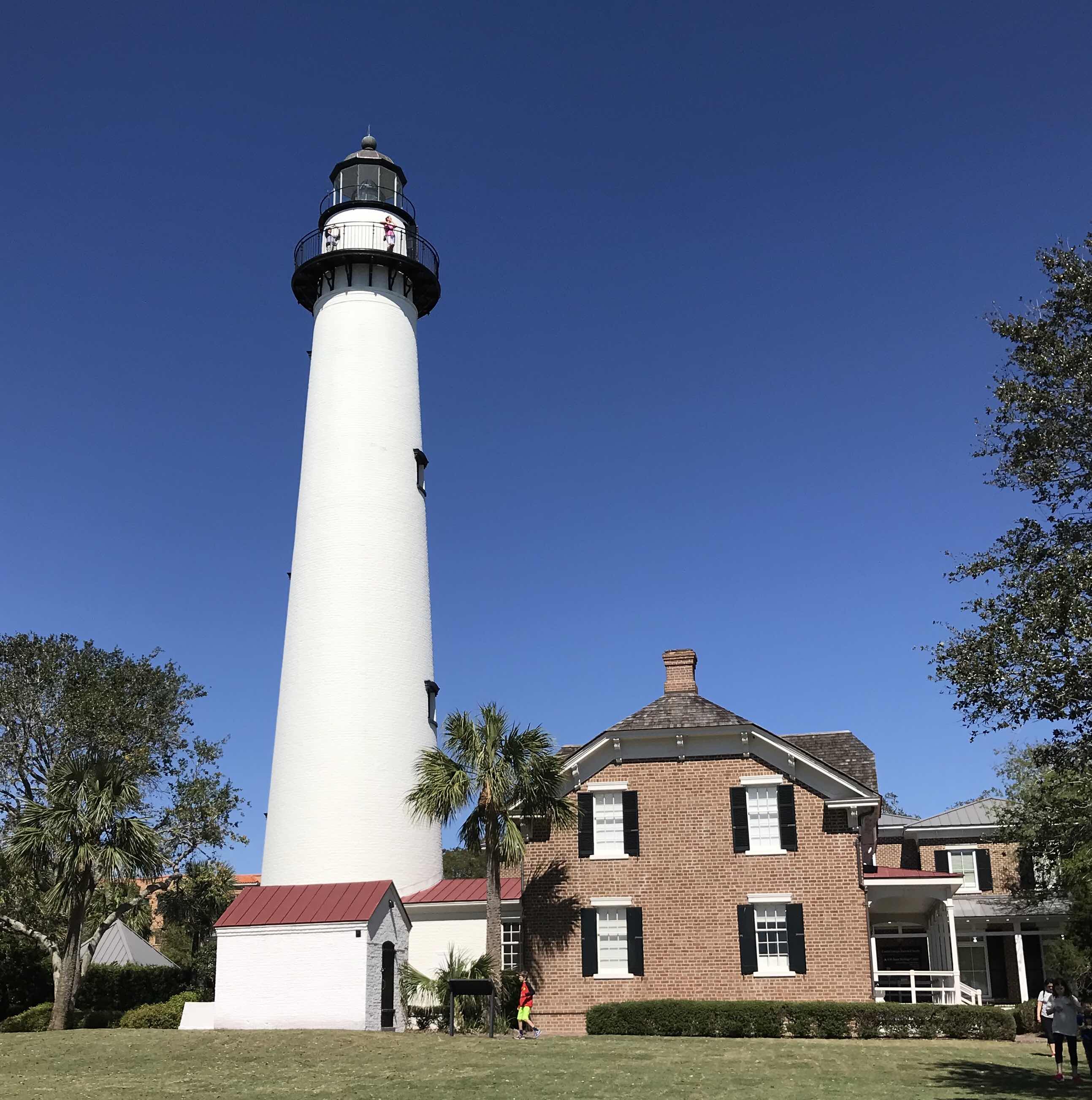 Then we went back to Epworth By The Sea.  I wanted to paint that pretty white church.  I took several photos and at first couldn't figure out what that was at the top of the steeple.  It was Spanish Moss hanging down from a tree near me.  Ha ha!  It looks like there's an antenna sticking up past the steeple. 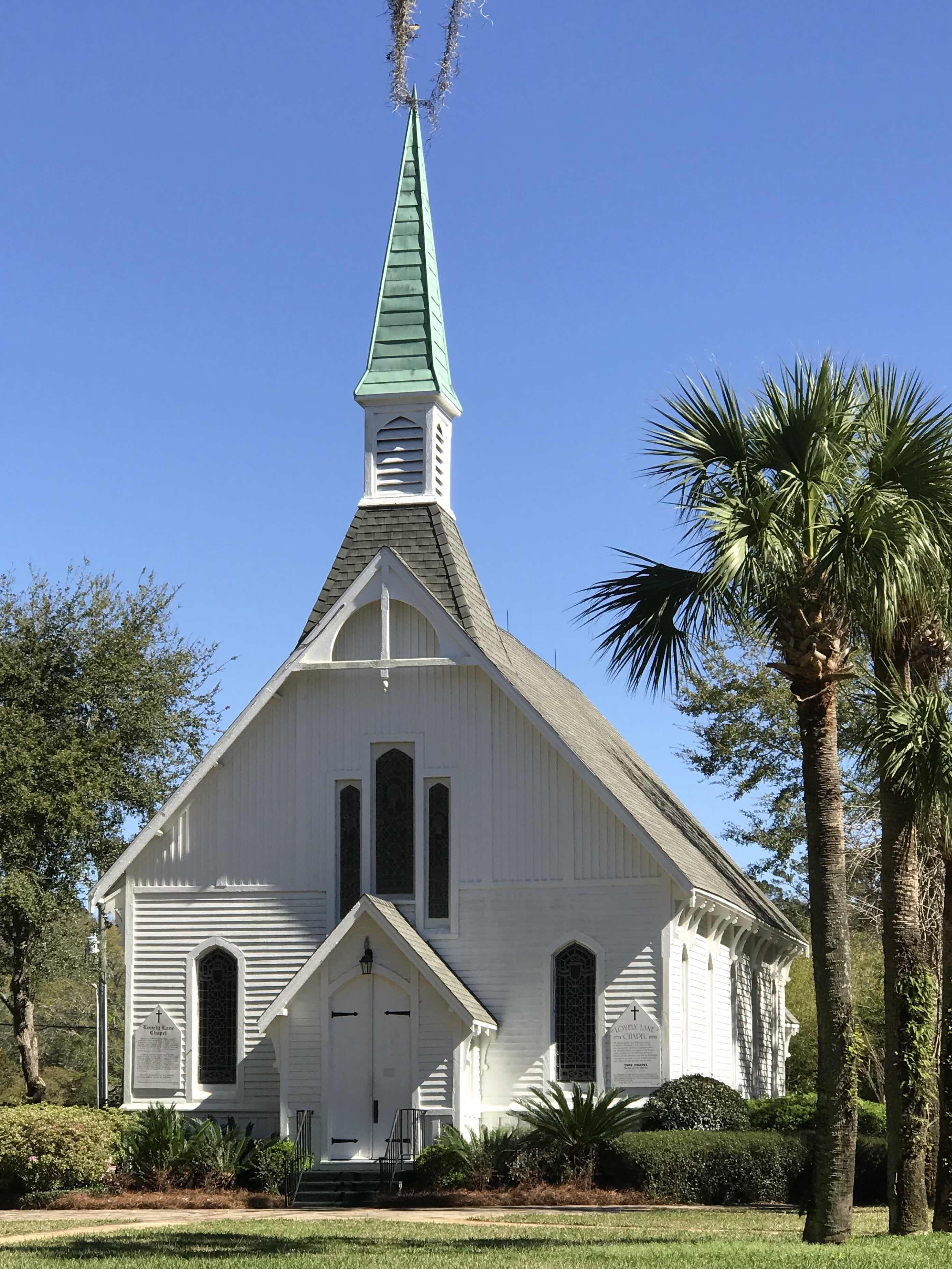 Mary O finished her sketch of the church, but I just couldn't get the proportions right.  So I'm going to work on that before we paint tomorrow.  Then tomorrow we will go back to Epworth By The Sea to finish the church paintings. 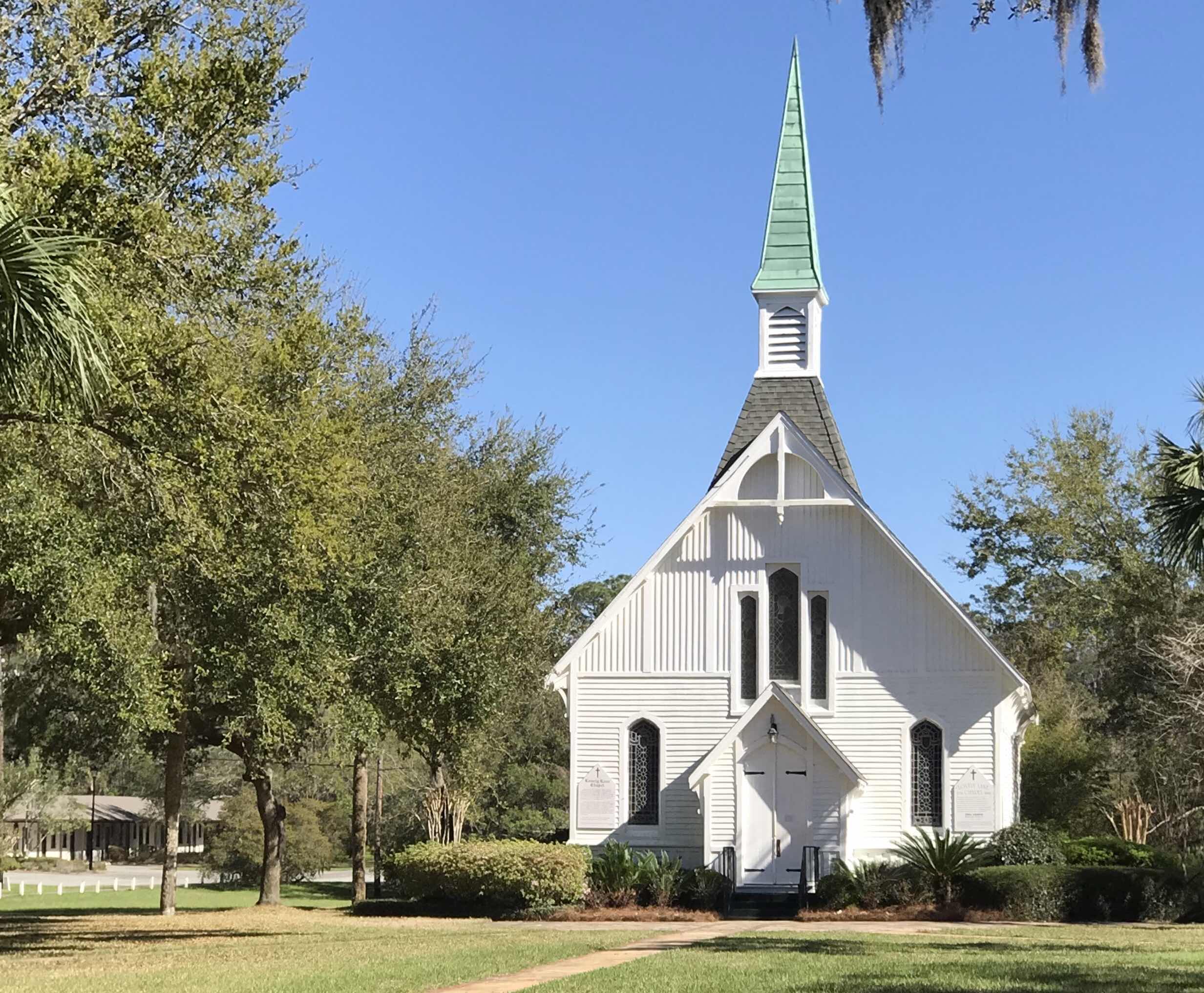 I met Mary O. this morning. She picked me up st 9:00 a.m. and we were off for a day of painting. We first drove a little ways into a park where there were some beautiful oak trees next to the water with Spanish moss hanging down from the branches. We decided a tree with the water and marsh behind it would be a good composition. Here is the scene - the one large tree with heavy moss especially to its left. 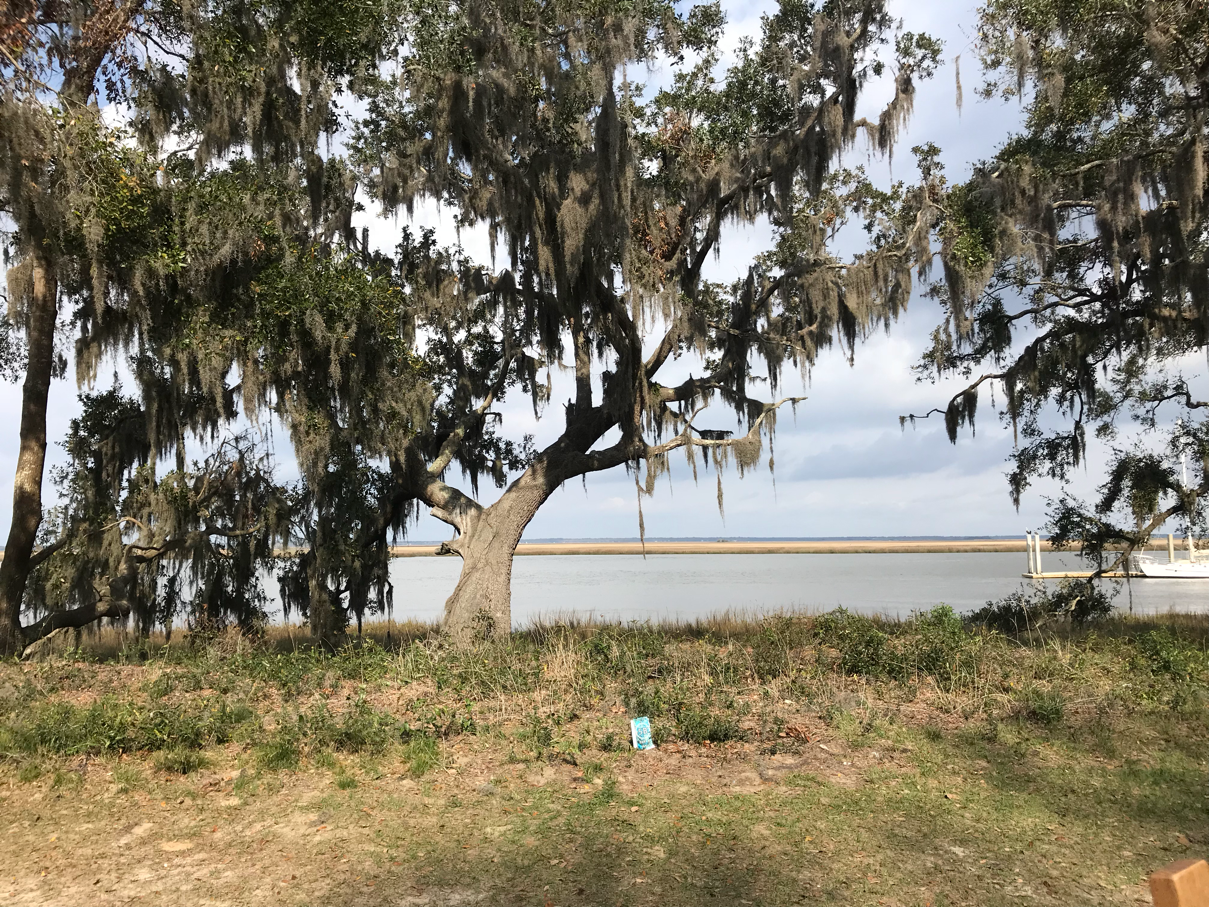 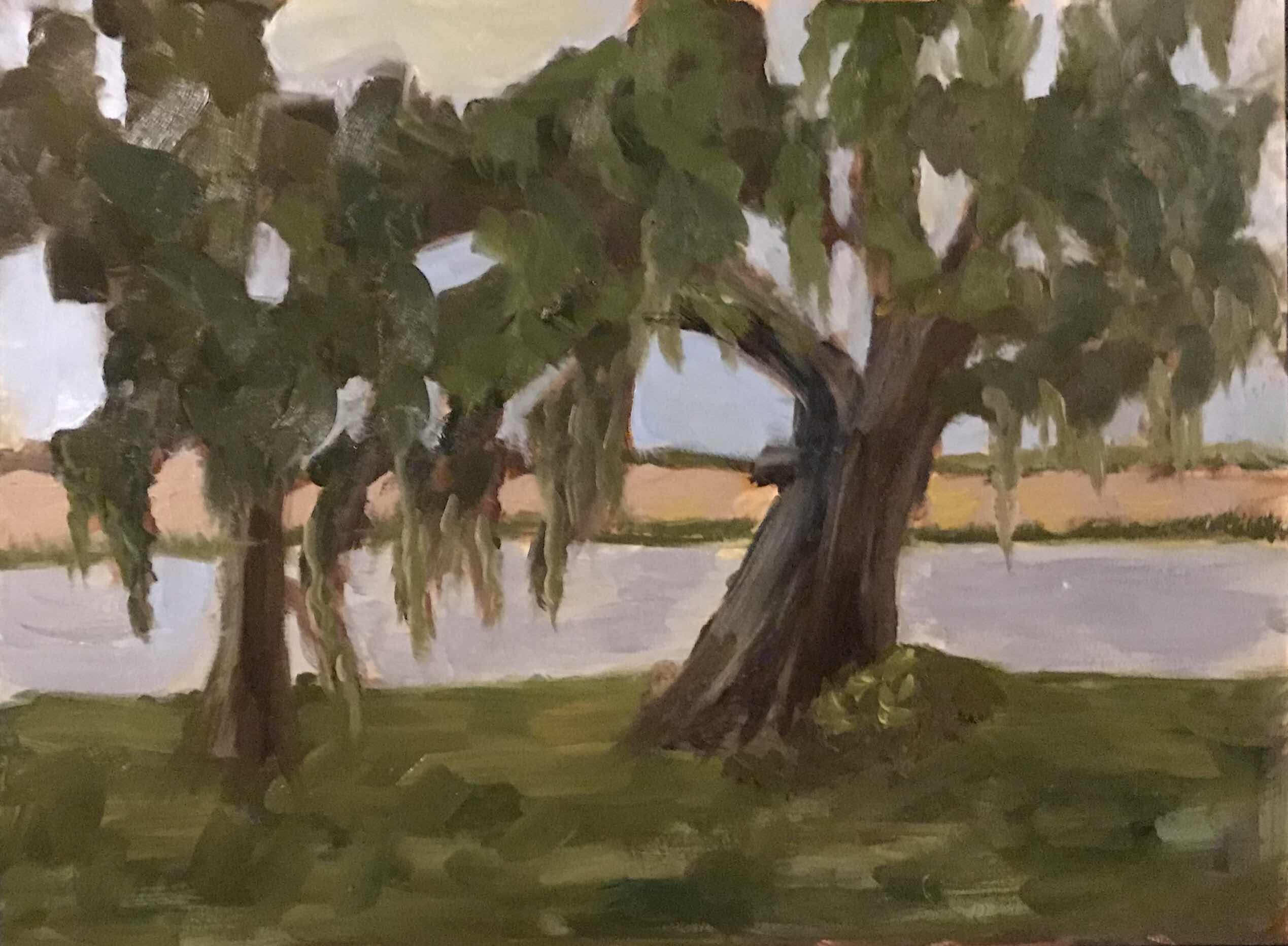 I need to work on that Spanish Moss! We left to go to St. Simon’s Island Village for lunch. On the way we drove through Epworth By The Sea - a place I’ve heard about my entire life! It’s a United Methodist retreat and conference center. I had to take some photos. I love this little white chapel at Epworth By The Sea. 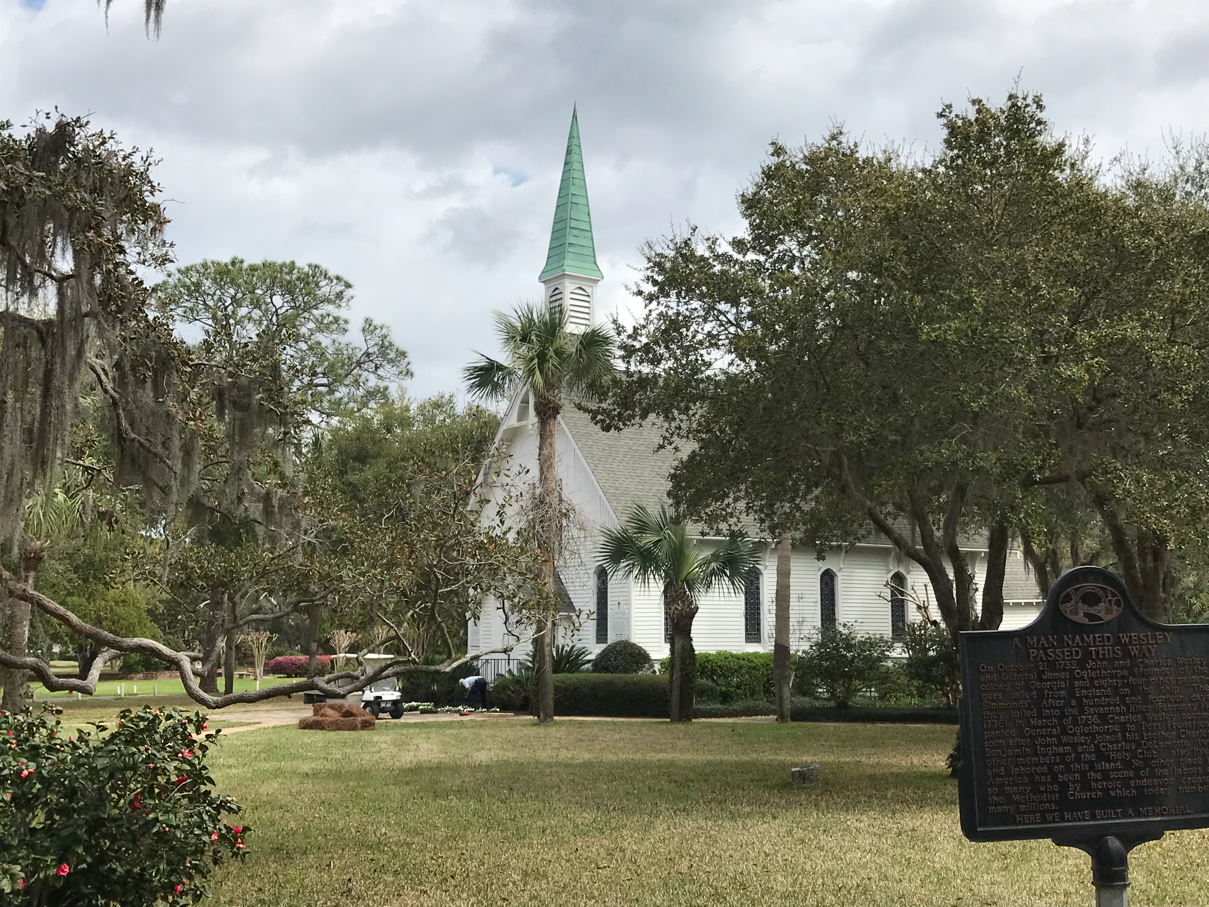 And then I saw this intersection. My father talked about Arthur J. Moore all the time. And Margaret Pitts lived in Waverly Hall. Ron knew her. What a cool thing to see! 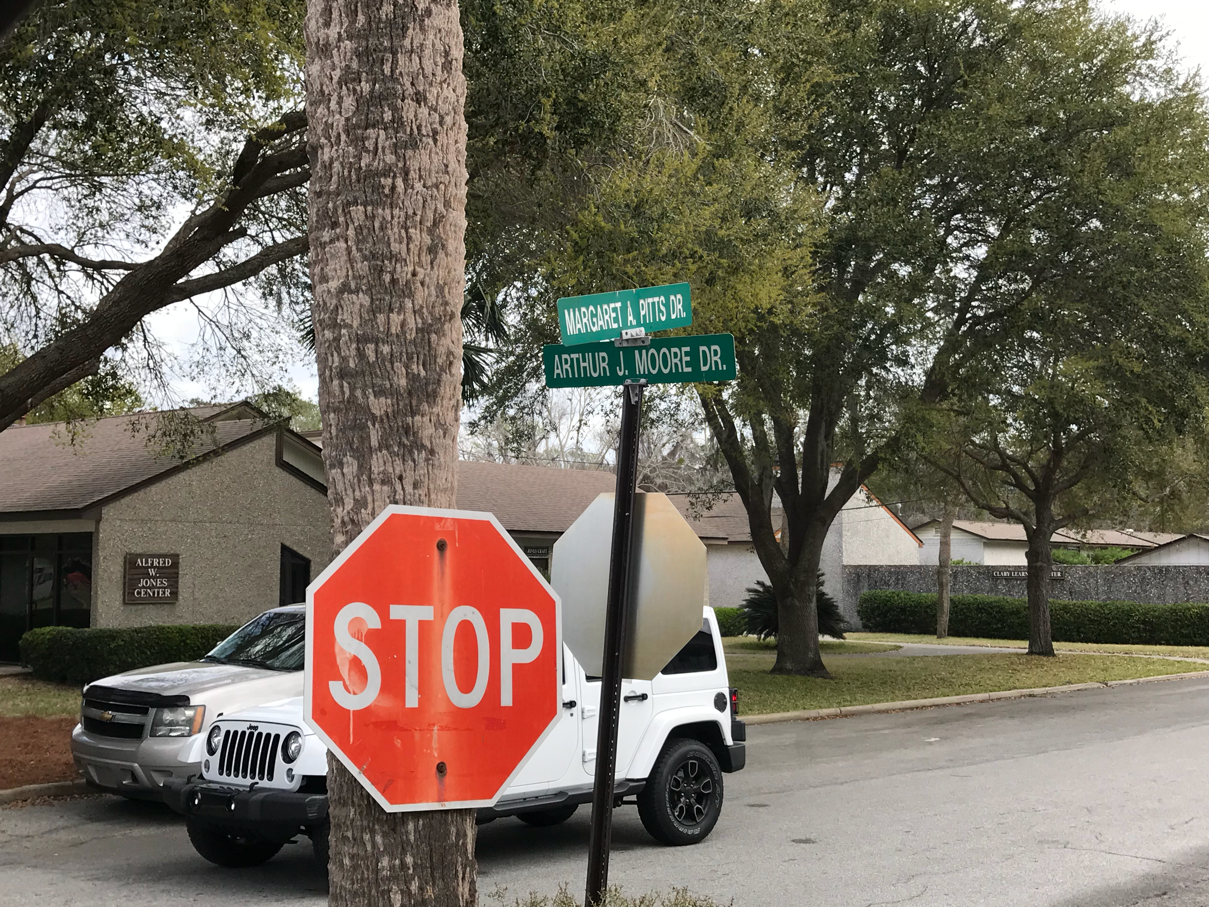 So lunch was in this bar where their team affiliation was very clear  I took this photo send to Lily and Sophie who are major Georgia fans. Then we went out on the St Simons pier and I took these photos. It was really too windy to paint though. So we gave up after about an hour. 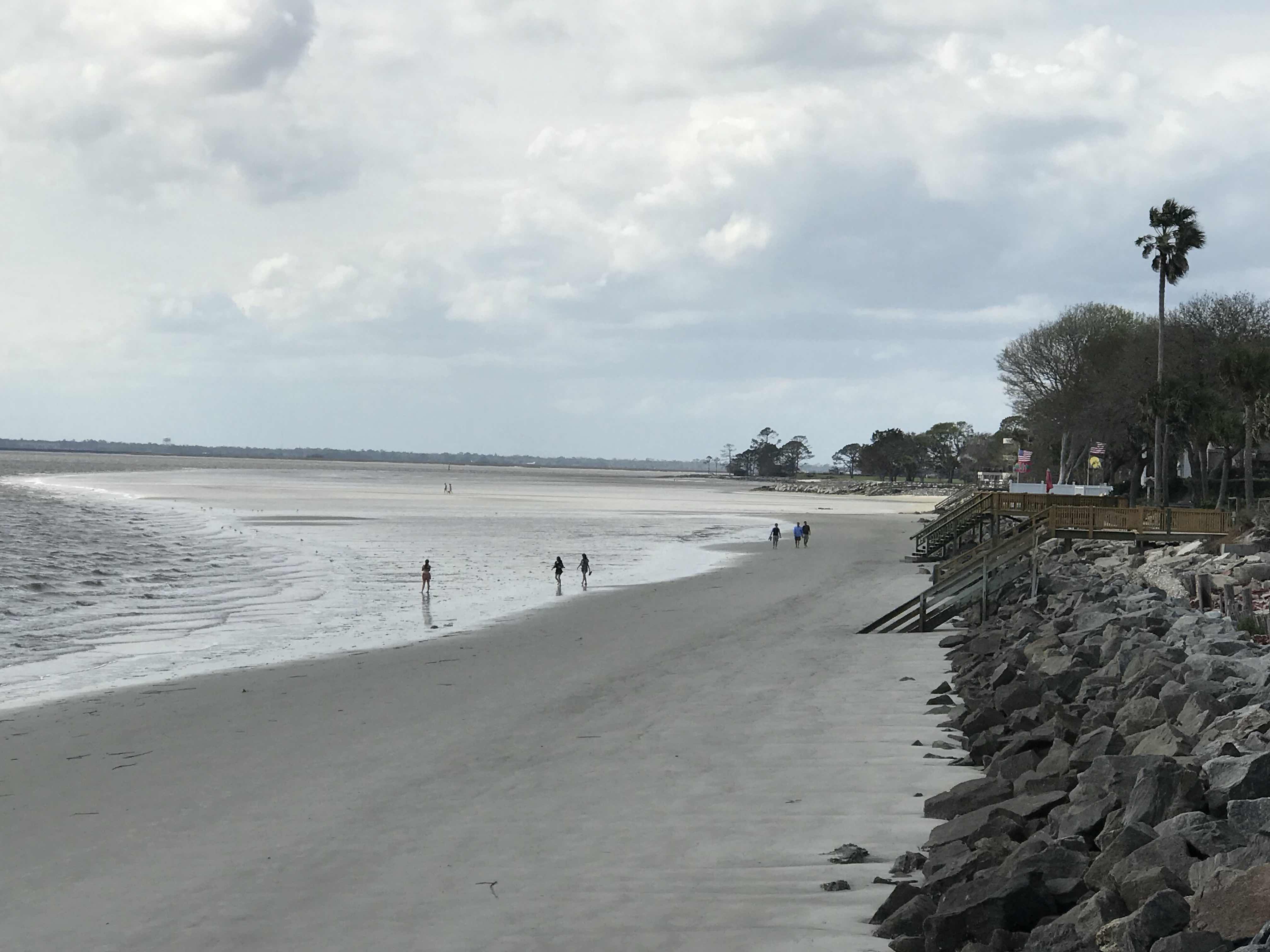 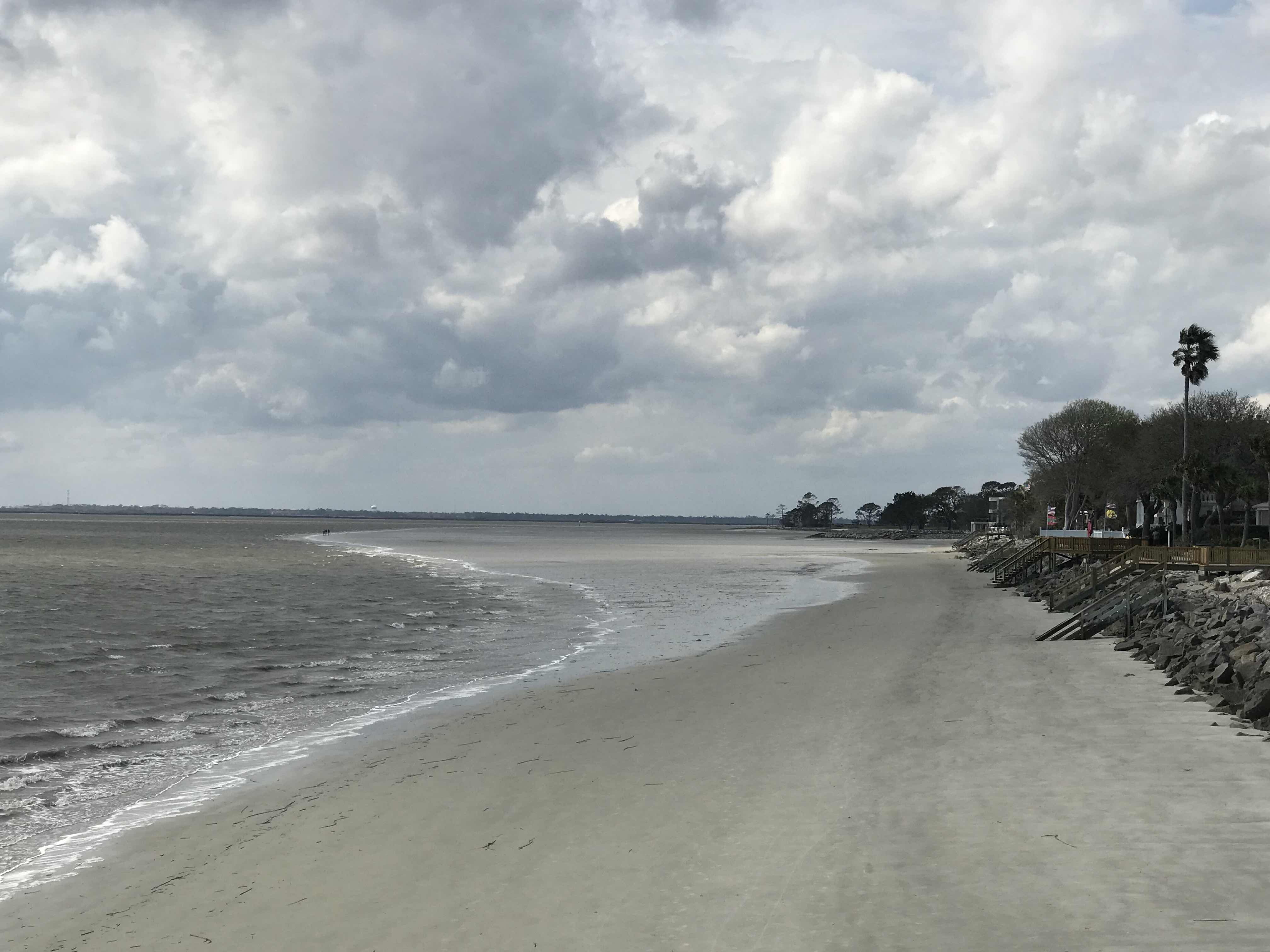 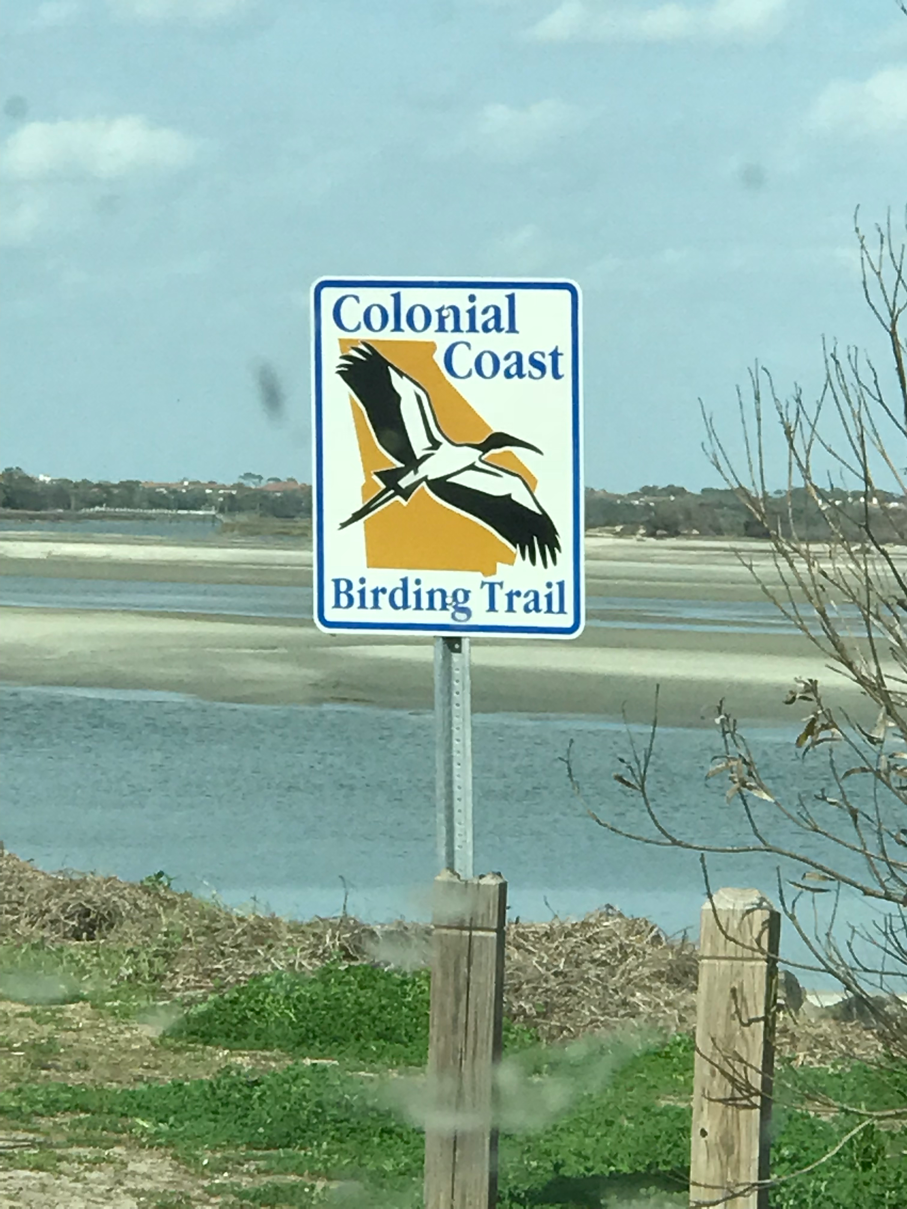